My organization project was made really easy for me, by the fact that I have to put everything in boxes. 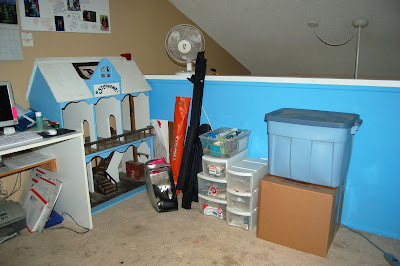 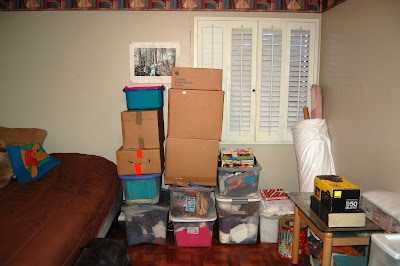 I've been cleaning and purging. I have a good pile of stuff to sell or get rid of. If there is enough I'll have a yard sale, if there isn't I'm thinking of trying a virtual yard sale - either blog or website. I have a few friends that have a blog specifically for garage sale type items - it's kinda cool.

When I started my organization project I started looking for idea's and I came across a flicker group (spun off from Etsy) of pictures of Studio's. There were lots of cool idea's. 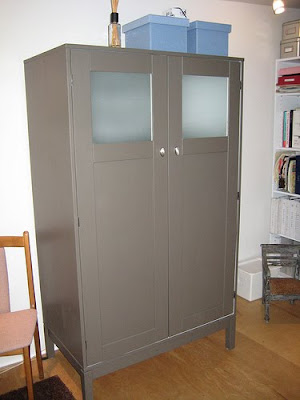 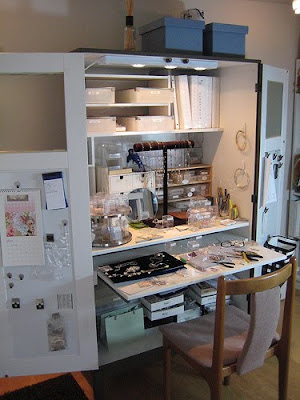 She labeled it as an ikea wall unit. I think I want 2 one for all the beading stuff like she did in the picture, and one for all the scrapbooking stuff. Then everything is in one place and you can open it up and you are ready to work - no pulling stuff on the the table getting all set up - doing your project - and then having to put everything away again!

I love the idea. Lets see if I implement it after the move!
Posted by Unknown at Thursday, January 28, 2010 No comments:

Well It's official - We are moving again. I've had the feeling that we were going to move again, for months now, I just couldn't see what was going to be the right fit. I prayed and thought it out in my mind over and over again. Nothing seemed to be the right answer. My mom came home from the hospital and she was doing good for a while - my brother hired someone to come in during the day while I was working and while my sister was busy with her children.

It seemed to work, there was always someone coming in and out of the house making sure she didn't need anything. Then she started loosing strength again each day it would be a little worse than the day before.

Then on one of those days - when I had driven to my mom's house for the 3rd time that day and Randy was having a bad mental day - I just couldn't see a way out - so that night I really felt I was done I couldn't do it - I couldn't take care of everything that I needed to take care of.

I woke up the next day and drove to my mom's after walking the dog and some serious contemplation. As I pulled into my Mom's drive way - I looked over to the house next door and it had a 'For Rent' sign on it! - All I could do is look up at the sky and say "Thou art funny"

So this past week I found out that GOD has a sense of humor and he knows when we are at our wits end.

So the deposit has been made - the 'For Rent' sign has come down - I have given 30 days notice to the most wonderful landlady I've ever had - I feel so bad leaving. And we get keys to start moving on Feb 15th.

Sorry La Quinta Ward - We are moving back to Santa Rosa. 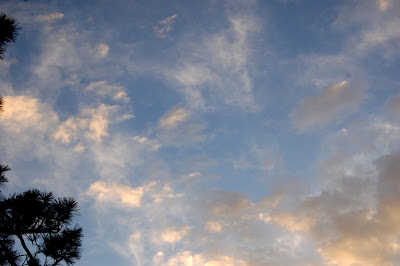 A couple of months after we moved into this place - it was looking like we were going to have to move again. First because my Son got married and moved out - he had been giving me some money not a lot but still some. When things are already tight you get worried about loosing a couple hundred bucks. He's been gone 3 months now and I'm still above water, so it looks like we'll be able to stay. Then my mother woke up and was paralyzed from the waist down. We had no idea what had happened. She lived in her home for about a month - and luckily four of her five children all live in the same town so we took turns coming in and out of her home to care for her.

She was hospitalized 2 months ago - they think some kind of virus attacked her spine. They gave her medication and she has regained some movement from the knee's down. She is determined to walk again and I know she will. She comes home today, to her house she has been in a Rehabilitation center for the past 4 weeks and they have taught her how to care for herself. So it looks like I won't have to move back in with her. Which is good because she didn't want me to anyways - The dog, the Cat and my Husband drive her crazy!

So this MONTH I'm going to finish Organizing:

This is my Fabric it came out from under the stairs when Michael moved out and made it's way into his room! 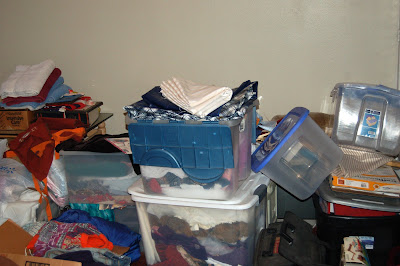 This is the buffet table in the dinning room packed with currently finished projects: 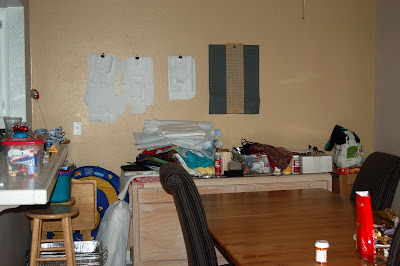 This is one side with Scrapbooking stuff: needless to say I haven't put a page together since I moved here. 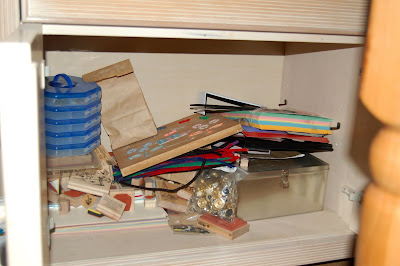 This is the other side with beading stuff: Haven't done any of that either. 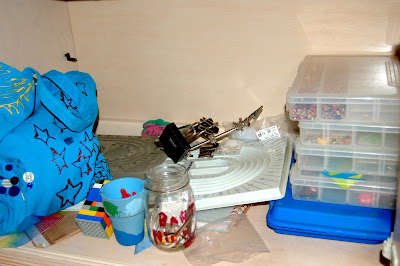 This is the landing on the way up to the office: 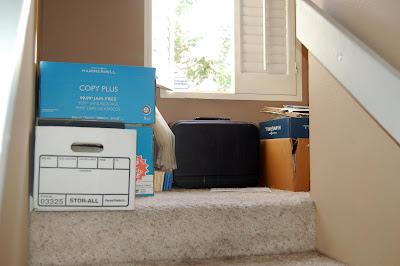 This is the office: no room under any of the counters or desks: 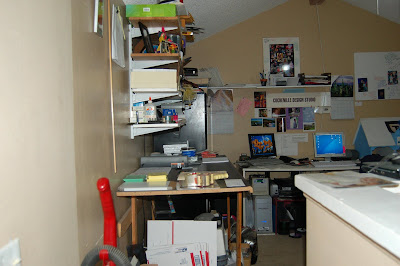 I did manage to organize the yarn before life decided to kick my butt: 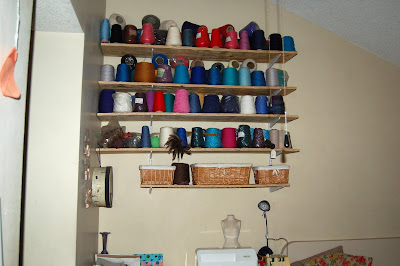 But the knitting machines are somewhere in there: under the stairs. 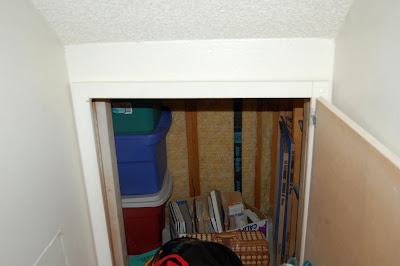 So in order to have someone to account to I'm posting it here - I'm going to Organize, Because I don't have to move. And if I do have to move well the move will probably go a lot smoother!

And this is the dog looking at me like I'm crazy! If anyone has some extra shelves feel free to send them my way! 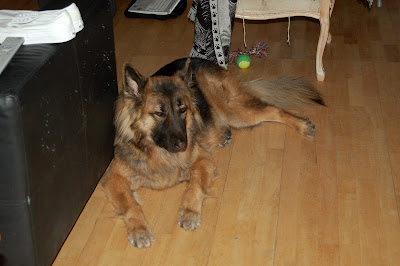 2009 was a very strange year, and not just for me. It seems that everyone I spoke to throughout the year had major stuff going on in there life.

I really wasn't ready for this entire Holiday Season - Starting with Thanksgiving, or plans changed 3 different times because of all the family going in and out of the hospital. I would really like to keep the whole hospital stuff in 2009. It looks like my mom will be out of the Hospital on Wednesday. I am so grateful that everyone came out of '09 all in one piece, and the pieces that aren't currently working well look like they will recover. It didn't look like they would for all three of them at the beginning of each ordeal. My mom's legs, My daughter's knee's and my Husbands brain. I truly Thank God that everything was semi-normal at the end of 2009.

The best thing is that the look into 2010 isn't looking so bad. A lot of adjusting to all the stuff that happened in 2009 - the biggest thing for me is that my son Michael (25 years old) ran off and got married. Overnight, and without us. He is living nearby with his wife. I'm still not sure how I feel about that. Well actually I know how I feel about it - but I would really hate to say something that I would need to take back some day. So until my emotions are in check, I'll try my best to keep quite!

Which is probably why there haven't been much blog posts, lots of time at the hospitals and stuff going on in life that I would rather not talk about.

So our Christmas picture was looking empty - So I decided to include the dog - that was really hard to do - I have some really funny pictures - but I'll only post the end result of several hours of posing and even that one is actually 3 pictures brought together in Photoshop!

I hope you all have a Happy New Year! Thanks for all the support! 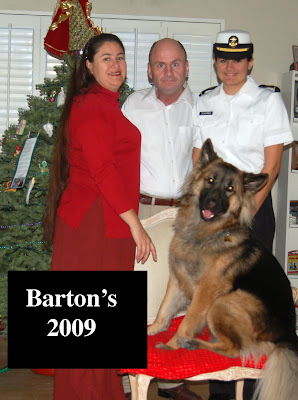