I knew stubborness was a positive trait!

At 4 PM yesterday I continued with my determination to knit a swatch. I followed the instructions in the manual, every step. I would set up the needles half forward half back, hold my yarn and move the carriage to one side clearing all the needles. I would grab the cast on comb and place it on the yarn, but it wouldn't give it wouldn't give me any slack. So I sat there and with the crochet hook move the yarn needle by needle giving the cast on comb some slack to hang down like in the picture. I would bring the carriage back and it would be really hard to pull and then in the middle of the needles it would get stuck. I would follow the directions in the book to unstick the carraige. I did this several times. Then realized that the latch on the needles were getting bent. So I decided to turn on the TV and watch a couple episodes of Law & Order and went to bed.

I woke up this morning with renewed detemination. So I called in sick! Just kidding, sort of. I am answering Cochenille phones and emails but those are easy.

I decided to give the 940 one more try I changed all the needles with bent latches, and gave it another try. It got stuck again. Oh well. So I started searching online for tutorials, manuals, books, any thing that might help, and nothing. I did a search for "Knitting Machine Teacher" thinking, I'm not going to be able to get this by myself. I found the greatest article "Hand and Machine Knitting: The differences and Similarities." at http://www.yarn-store.com/hand-and-machine-knitting-the-differences-and-similarities.html.

Oh I don't know who Angelika is but I love her. Well written for beginners. And the statement from Angelika that made me keep going "Machine knitting takes perseverance and a stubborn constitution not to quit".

And the statement from Angelika that made me think maybe I should try another machine: "Are these machines cranky?? I'd say that each one has a personality of its own and you need to figure yours out." And this Brother 940 and I weren't becoming friends. So which one do I set up next. I went back to the list posts and then I remembered the comment on my blog from Aaron and I got it "I will set up the LK150.

I put the 940 away - I will find somewhere that fixes machines and they can tell me if it was me or the machine. I opened the LK150 box and my first thought was this looks like a toy. Like the sewing machines they make for children just learning to sew. 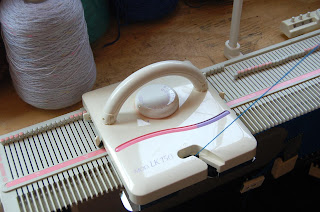 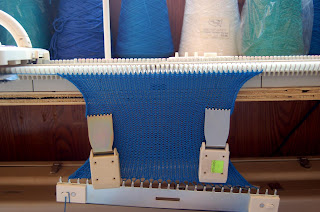 Thank you all - Thank you.

My trial in Persistance

So I decided to tackle my ball of yarn yesterday. I pulled and carefully spread apart the knots. I laid all my excess on the floor and kept pulling and unknotting. I finally got it all untangled and started to crank the little handle, it was going great I wound up all the slack. I decided that was easy I'll lay down some more slack and wined that up.

The average high around here is between 110 and 115 degree's in June. We set up fans to move around the cold A/C air, it makes it feel a lot cooler. So there is a fan in just about every room. my work room is no exception.

I laid down excess yarn and wound it up about twice or so, And then I get the end of the yarn to close to the back up the fan. It sucks it up so fast I took about half of what I had in my hand before I could react and turn off the fan. 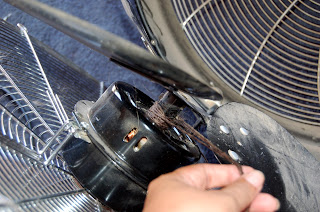 There was no getting around it this time, I was going to have to cut the yarn. So I left it, and went to bed.

I got up this morning determined to get my fan working and wined whatever is left of the yarn. I pulled the fan apart, and started pulling. Pulled as much as I could before I cut. I took me an hour to get all the yarn from around the center of the fan.

But I did it! I then put the fan back together and it works, yay it was an $80 industrial fan. I then wound the remainder of the yarn. Today I'm going to fix the bent needles and I'm going to knit a swatch. I really mean it - I hope I don't get struck by lightning. 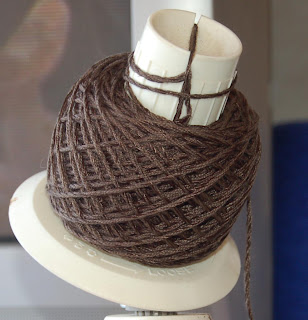 The universe is against me. 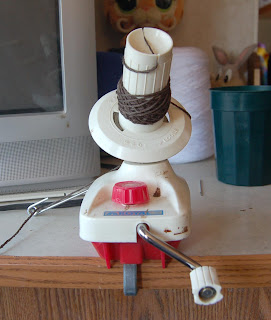 I woke up on Saturday the 21, with the thought "a free Saturday I think I will knit my first swatch". So I opened a box that said "home twister" and set it up. 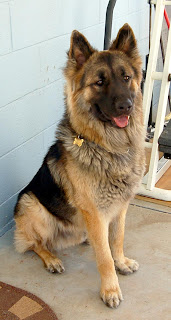 So here are the after shots, (it would have been so funny if there would have been a video camara, but Not) The yarn is in a ball in the middle, today's Monday and I still haven't dealt with it. The needles on the knitting machine must have caught his fur and taken good chunks, because he bent the kneedles at some point in the struggle. 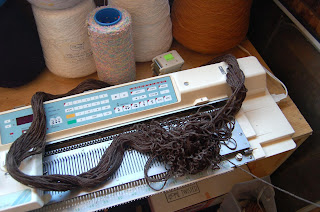 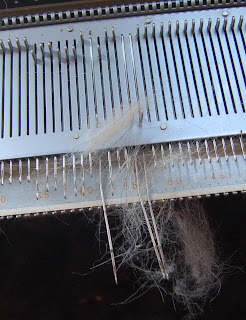 Lucky me - my sister showed up with her baby and had nothing to do. So I went over to her house to help her sew a nursing cover. Then we hung out, then picked up mom and went to eat mexican food. It was so good. I ignored my little situation all day Sunday and today it's back to work. And the knitting machine well it still sits just as I left it on Sat at 10 AM.
Posted by Unknown at Monday, June 23, 2008 No comments: 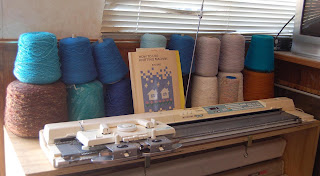 Oh, Yesterday was great. I was home alone. My mom left to Mexicali, BC, Mexico for a couple of days. My husband went camping with the boys, And my daughter went to a graduation party with her friends. So I got a lot done, especially because I only work until noon on Fridays. I do have the computer on all day/night and check Cochenille Tech Support, but that is no biggie.

So because the list Mom on KMaholics asked for a list of what I have to put on there database, I went to storage and brought home all the boxes I was so graciously given. There are 6 knitting machines - Brother Profile 585, Compuknit KH-910, Toyota KS650, Brother KH-890, LH-940 and LK150. The other boxes are labeled STD Gauge Ribber KR-850, Colour Changer KHC820A, Colour KRC-830, and Knitleader KL-116. I am determined to make there previous owners proud. 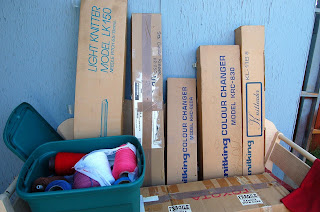 So I think I have figure out the solution to one of my knitting wow's. Knitting Wow number 1: it took me 4 hours to knit the 10 rows in the previous swatch post. At that rate I'm going to have a sweater by next year, that just isn't going to do. Solution: Set up the knitting machine's already. I love the skinny yarn so it will go much faster.

Knitting wow number 2 doesn't have a solution yet. Knitting wow number 2: find a fast way to learn about yarn, I'm sure there is a book out there, that will list all (or most) yarns tell you what they are good for, suggest proper gauge to get good drape. so on and so forth. Sort of like Sandra Betzina book of fabric, but for Yarn.

I chose to set up the Brother KH-940, but only because that is the only one that I could find the Manual for quickly. Along with all the knitting Machines came lots of yarn, so I have plenty to play with. I got the Machine all set up and was getting ready to follow the directions for a swatch but for the life of my I couldn't find the Cast on Comb. I finally found it in a box with all kinds of other stuff (looked like the comb but with a wire thru the hook)

I cleaned and organized everything, and went to bed around midnight, that is late for me - I love my sleep. And this Morning I woke up to a full house again. Well if I get one alone day a month I might figure this all out before the end of the year. 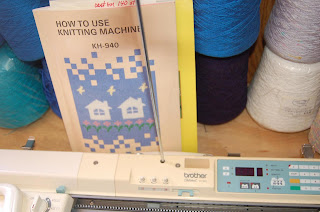 School is done for the year. 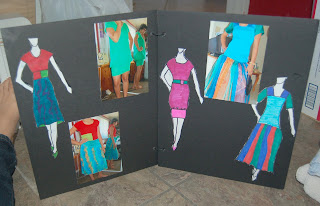 My daughters teacher came and picked up her homeschooling homework today. She procrastinated every step of the way. She will be a Senior next year - Yahoo. She didn't stick to the design board that she created at the end of the Fall semester. She designed all new designs to sew, and only finished 3 designs, and one of them was one I sewed for her. She sewed the muslin so I think she worked for the credit to call it her's. She had fun in Garment Designer, she took like fish to water. Young people arent' scared of computers, so she took the sewing skills I taught her the first semester and was able to open a file in Garment Designer and start moving points. I did have her make muslin of all three and there was only one pattern that she had to rework, to get it to where she wanted it. I'm proud of her, even though she says she now knows she doesn't want to be a Fashion Designer. Well at least she figured that out early on in life, and she can now explore all those other things she thinks she wants to be. Marine Biology is her next career goal. So now we make plans for the summer. Considering it will be between 100 and 125 degrees until around September, we are going to have a lot of indoor activites. Yay I can focus on setting up the knitting machines. 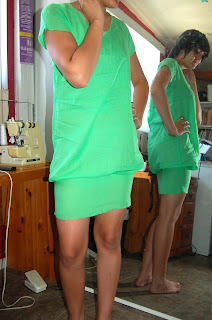 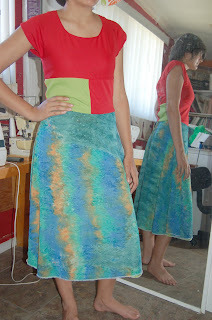 I have always been blessed with needed people coming into my life, meaning when I need something the right person shows up in my life to fill that need. In this case I have been blessed with a whole group of people. I found a Yahoo group that has embraced me like an old friend, maybe because there were a couple of old friends there. I had tried several other Machine Knitting groups, and I didn't click. The list mom even though she was out of touch made the whole experience a heart warming one. Thank you all at KMaholics.
Posted by Unknown at Thursday, June 12, 2008 No comments: